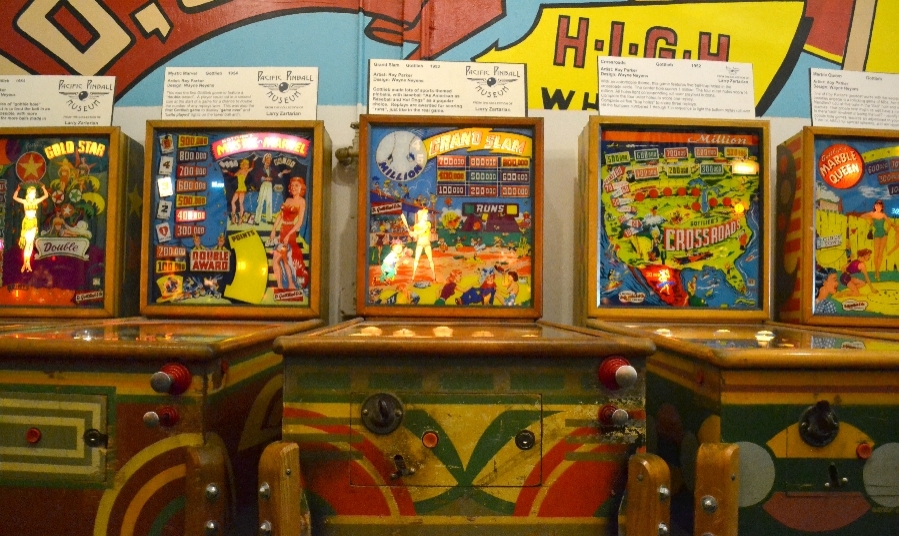 Where: Pacific Pinball Museum: 1510 Webster St., Alameda
When: 6PM December 31st- 1AM January 1st
What: Celebrate the arrival of 2016 with the Pacific Pinball Museum! At the NYE Anniversary Party, patrons will have the opportunity to play on some of the over 100 machines with world pinball champions. The museum will also provide a buffet of food and drinks, champagne, DJ, dancing, and more as a silver ball is slowly lowered to the count-down to midnight.

Money raised from the night benefits the museum, which is a 501 c nonprofit. Former exhibition designer Michael Schiess started the museum in 2001 when he purchased a collection of 36 machines. After pinball exhibits at other museums disappointed him with their offerings, he founded the museum in 2004 and, in 2009, renamed the museum the Pacific Pinball Machine after turning the museum into a nonprofit organization.

The museum today provides a colorful, interactive journey through the history of one of America's most-popular pastimes. The machines in the museum come from all over the world and from many time periods; some of the machines displayed are from as early as 1879 (a Montague Redgrave Parlor Bagatelle) while others are new, sleek productions. The games presented are rotated from a collection of over 400 to highlight different pinball artists and periods of design. Some of the major pieces include The Addams Family and Twilight Zone.

The museum also aims to aid science and history education on the island. Its mission statement is to "inspire an interest in science, art and history through pinball and to preserve and promote this important part of American culture." The Pacific Pinballs team accomplishes their mission through community activities and by teaching classes, including "Introduction to Electromechanical Pinball Machines," "Learning History through Pinball," "Recognizing Pinball Artists," and "The Necessity of Invention—How Pinball was Created, and Why." The museum is also a hot field-trip location for children, who enjoy learning by playing on colorful, interactive exhibits.

The museum has come far from its humble beginnings. Featured in the New York Times and SF Chronicle, it has also signed an agreement with the Phaeno Museum of Wolfsburg, Germany to further promote science, technology and math education through pinball machines. Soon, because of an agreement with the City of Alameda, the museum will relocate to the now-abandoned Carnegie Library on Santa Clara Ave. The Pacific Pinball team is excited that the new building will allow three times more displays as now and provide an opportunity to expand their already-exciting programs. The move to the magnificent building—built in 1902 and empty since 1998— will require fundraising to cover moving costs and renovations.

We at Hawthorn Suites hope that everyone in the community has a wonderful New Year's Eve!